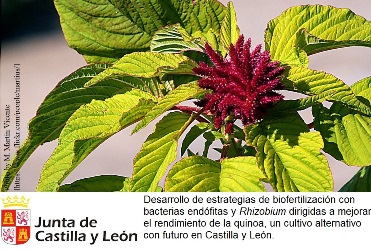 DEVELOPMENT OF BIOFERTILIZATION STRATEGIES WITH ENDOPHYTIC BACTERIA AND RHIZOBIUM AIMED AT IMPROVING THE YIELD OF QUINOA, AN ALTERNATIVE CROP WITH A FUTURE IN CASTILLA Y LEÓN.

Quinoa or quinoa (Chenopodium quinoa Willdenow) is a plant of the Amaranthaceae family, subfamily Chenopodiaceae native to the Andean region of South America. Its seeds do not contain gluten and have a higher nutritional value than cereals due to its high protein content and its balanced content of proteins, carbohydrates and fats. In recent years there has been an increase in the cultivation of quinoa worldwide and its consumption has become popular in European countries, where its cultivation has been introduced recently.

In Spain it is grown in Andalusia and in Castilla y Leon production experiences are being carried out with a lower yield, for now, than that obtained in other regions, so the increase of quinoa production is a future challenge for farmers in Castilla y Leon. Although there are many factors involved in the yield, the contribution of nitrogen is a determining factor in the production of quinoa.

Therefore, given that in Europe the chemical nitrogen fertilization is being limited, it is necessary to look for alternatives for its partial or total substitution by biofertilizers based on bacteria that increase the contribution of nitrogen to the plants and within these bacteria, the ones that can most directly influence their growth are those that are part of the endophytic microbiome of the plants.

So far there are no studies in Spain on quinoa endophytic bacteria and their potential as probiotics for this plant. In addition to nitrogen fertilizers, it is also necessary to address in Europe the partial or total substitution of herbicides using alternative agronomic practices in the fight against weeds.

One of the most successful is intercropping with legumes, especially with clover, which in European soils establishes N-fixing symbioses with bacteria of the genus Rhizobium. This genus has been shown to be an excellent growth promoter not only for legumes but also for non-legumes, including spinach, which belongs to the same family as quinoa.

Therefore, this project proposes the design of probiotic consortia formed by endophytic bacteria of quinoa and Rhizobium strains that nodulate clover to be used as biofertilizers in intercrops of quinoa and clover, the latter used as a cover crop and also as green manure for the next planting season.

The ultimate goal is to substitute totally or partially the chemical and herbicide fertilization in quinoa crops using biofertilization with bacteria and a legume as a cover for weed control and as a green manure, to be considered as a greening practice by farmers, contributing to the sustainability of Agriculture in Spain.